The roots of R4U go back to 2011 and the formation of a number of independent and unconnected residents’ groups. Over the following 2 years a number of the residents groups met and agreed how they could best work together to represent communities across Uttlesford district. These groups connected under the clouds of a failing district Local Plan where decisions on new housing were being made for non-transparent reasons rather than following the evidence for where were the best locations.

At the time the Conservative draft Local Plan proposed a new settlement at Elsenham and Henham and the rest of the housing dispersed around the existing towns of Saffron Walden and Great Dunmow, and a number of villages in the district. There was almost nothing proposed in the way of new infrastructure, such as roads and schools. The groups were unhappy with this situation because public opinion, housing need and evidence were being ignored. 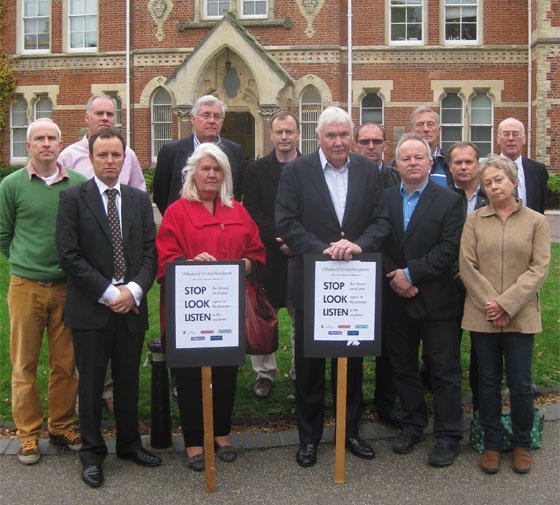 The residents’ coalition agreed a series of united aims:

Unsatisfied that the leadership at Uttlesford District Council still refused to follow an evidence-based process, in the Autumn of 2014 a number of those residents groups formed a political party, Residents for Uttlesford (R4U). R4U had the intent to carry forward the aims of the coalition by changing the system from the inside, whilst the remaining residents’ groups continued to apply pressure from the outside.

The residents’ coalition and R4U continued to apply pressure on what they considered was a flawed Local Plan by Uttlesford District Council. They were eventually found to be correct when the Local Plan was rejected by the Planning Inspectorate in December 2014.

For the 2015 local elections R4U produced the first local manifesto that had ever been produced for Uttlesford. This encompassed the goals of the residents’ coalition together with well-rounded policies that covered all the major topics, including the economy, schools, roads, environment, health and community.

R4U achieved remarkable electoral success for a new party. After the May 2015 election, R4U had councillors at all levels of local government, county, district, town and parish, from Dunmow to Saffron Walden, and was the second party at Uttlesford District Council.

Since the 2015 local elections R4U continued to champion residents’ causes. It helped new resident groups to get off the ground, such as in Thaxted. It has also maintained and expanded its alliances with the founding members of the original residents’ coalition, including Save Our Villages in Henham.

Where it is the first party at a council, such as at Saffron Walden Town Council, it has fixed a £1m financial hole left by previous administrations and repaired crumbling community assets. On other councils, such as in Great Dunmow, it has been working to create a more vibrant town centre economy. A number of places it’s councillors are working on the development of Neighbourhood Plans.

On Uttlesford District Council where it is the second party, it has continued to push the Conservative leadership to do a proper job. In late 2016 continued pressure forced the UDC leadership to withdraw another failing Local Plan and go back to the drawing board – this time following an evidence-led process.

In 2017 R4U contested a by-election in the Elsenham and Henham ward where it captured 60% of the vote and gained 2 additional seats at the district council.

In the May 2019 local elections R4U gained control of the local planning authority, Uttlesford District Council. It inflicted the greatest Conservative loss of seats (-83%) in any district council where they held a majority. R4U gained 26 seats, reducing the Conservatives to a minority party of 4.

A Future Built Around Residents