The draft Uttlesford Local Plan is in public consultation until Monday 5:00PM on 13th August 2018.  Residents should provide their feedback to UDC on their website at the link below (not this website)  before the consultation closes:

We are concerned that this draft still has serious flaws, including those exposed by the Inspector of the Braintree Local Plan when he rejected it earlier this summer. Read what we said about how this draft of the Uttlesford Local Plan will allow developers to asset-strip £billions from Uttlesford communities.


What is a Local Plan?
The government requires a district council to allow ‘enough’ new homes to be built. In Uttlesford’s case this is Uttlesford District Council (UDC). To do this UDC is required to produce a Local Plan that says where it will, and will not, allow new building. As part of that Local Plan the council has to produce evidence to say how many are ‘enough’ new homes. In our case UDC has determined that number is currently over 600 new homes every year until 2033 – 14,000 in total. UDC is also required to produce evidence to prove that the sites it wants to allocate for new building are the most sustainable, i.e. in effect the best locations that create the least impact to our environment and existing residents.

Do not confuse the Local Plan with a Neighbourhood Plan. The 2 fit together but are different. A Local Plan provides a ‘helicopter view’ of where the planning authority, i.e. district council, will allow building. A Neighbourhood Plan fits under that and covers more of the details.

Why Should You Care
The Local Plan will decide where all the new homes and jobs are provided round here until 2033 and so where the investment goes for infrastructure such as schools, roads, healthcare, shops and other things.

To put it bluntly, if you don’t get involved you may find 1,000 houses dumped on your doorstep or no school places for your family members.

During the process UDC are required by law to consult with local people a number of times. UDC is supposed to listen to and act on public responses. And importantly your responses form part of the evidence that the Planning Inspector will read when he or she decides if the Plan is fit for purpose. If they don’t like what they read, they’ll reject the Plan.

Please use the link below in the section Respond to the Public Consultation.

Summary of this Local Plan
UDC has calculated that they are required to find places for 14,000 new homes between the start of their plan and 2033. They have post-dated their plan to start in 2011 so they can count the 8,000+ new homes that they have already approved over the last few years. That means that in this consultation they are looking to find sites for the remaining 6,000.

In terms of the existing towns and villages, in this draft of the Plan UDC is proposing: 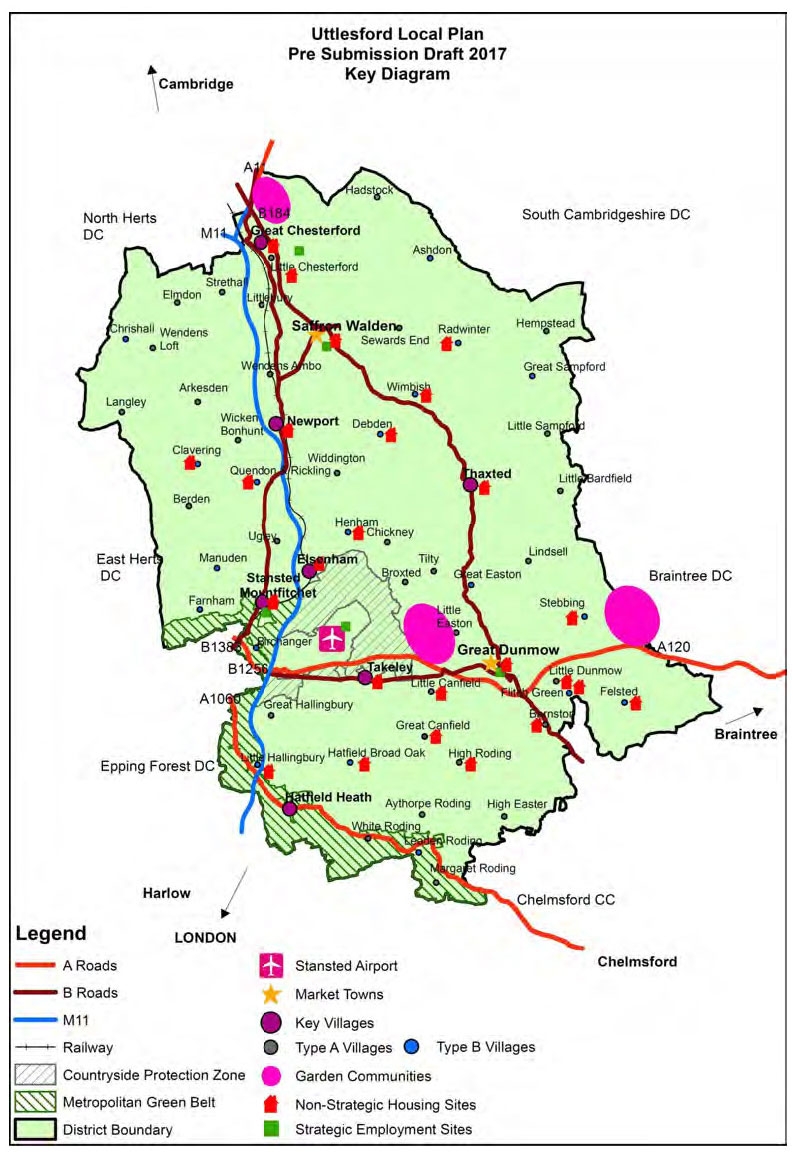 New homes will go in 3 new settlements and in existing towns and villages (source: UDC)

Key Issues
There are specific issues for the different towns and villages in Uttlesford. Read below for things to think about when you are forming your responses to UDC’s consultation (see consultation link below).

R4U believes that this draft of the Uttlesford Local Plan is unlawful and will be found unsound by the Planning Inspector. R4U is particularly concerned after the recent rejection of the similar Braintree Local Plan, which confirmed a number of R4U’s concerns. If our Local Plan is rejected, it will perpetuate the current developer free-for-all and will cost local taxpayers even more money. It is right that the plan is fixed before it is inspected.

R4U has expressed its concerns to the UDC leadership, who have ignored them for the most part.

A few of our primary concerns are:

1. Issues for Saffron Walden
Of the 1,000+ new homes that UDC has already approved, 545 are yet to be built. So the additional 315 that they want to add means that actually 860 new homes are yet come to the town. To put that into perspective, that is 260 primary school places, 170 secondary places and 1,370 additional cars. And nearly all of those are on the inaccessible east.

Of the 315 additional homes, 90 are in small infill sites, and the rest are on the inaccessible east of the town, including 150 are proposed for the Kier site that was already rejected by two Planning Inspectors.

2. Issues for Great Dunmow
Of the 2,531 new homes that UDC has already approved, 2,166 are yet to be built. So the additional 767 that they want to add means that actually nearly 3,000 new homes are yet come to the town. To put that into perspective, that is 900 primary school places, 600 secondary places and 4,800 additional cars.

In additional UDC Is proposing a new settlement on either side of Dunmow. Easton Park is a few km to the west and this Local Plan proposes the first 1,925 of 10,000 new homes. To put this into context, Dunmow itself has 3,800 homes.

Further along the A120 at Stebbing, UDC is proposing another new settlement at Andrewsfield/West of Braintree. During this Local Plan (up to 2033) UDC is proposing 970 houses on that site growing to 5,000 over time.

Of the 767 additional homes in Great Dunmow itself, over and above the completion of Woodlands Park, the majority are on farmland which will extend Dunmow to the west all the way to the western Stortford Rd roundabout by the old gatehouse for Easton Park.

Find out more from local residents’ action groups either side of Dunmow:

3. Issues for villages being targeted for new homes
4. Issues for those likely to be directly impacted by new settlements

How to Respond to the Public Consultation
Responding is easy. It can all be done from the UDC website at this link:

Then click on the ‘The Local Plan and how to comment’ link, then ‘Online consultation portal ►’ and next ‘Read and Comment on Document’. You will to register and login to add comments.  The draft Local Plan document is split into sections with each paragraph numbered. There are tabs on the pages to view the comments that other have left.

You can also send you comments via email to: planningpolicy@uttlesford.gov.uk

R4U’s Role in the Local Plan
This UDC administration has been working on a new Local Plan since their last draft Plan was rejected by the Planning Inspector in 2014. According to the Inspector it was rejected because UDC wanted to build in poor locations without the proper evidence, and they’d failed to properly consult. That failure cost local taxpayers over £2m, which is more than £60 per council tax bill.

After that plan was rejected, in 2015 local people elected their first R4U district councillors to hold UDC to account over the Local Plan fiasco. As we are the second party at UDC we can’t make the decisions, but we can apply pressure for it to be done right and expose issues where we see them.

We are relatively happy with what we’ve achieved so far. A cross-party group was established to scrutinise the new Plan process after we pushed for it – and we have 2 seats on that team. We’ve written to the Planning Inspector when things have been going off track and so the UDC administration adopted a process which appears to be more evidence-led and driving to a much more sustainable solution. And now UDC has a new chief executive, head of planning and head of legal. They also reinstated the ‘regulation 18’ public consultation which they had refused to do in 2016.

However constant delays in the delivery of a Local Plan by UDC mean that there is now a ‘presumption in favour of development’, i.e. it is harder to prevent poor or unsustainable planning applications. And we believe there are still major issues in this version of the draft Local Plan.