What a great way to end a week -the news from Newport’s UDC Cllr Neil Hargreaves that after a year of photos, reporting, emails and follow ups, shortly after I visited the Bullfield’s site, Essex Highways have started work! 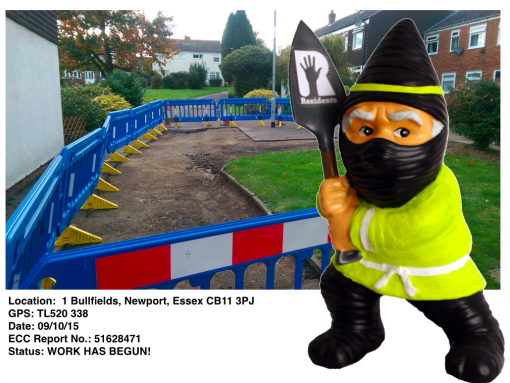 It was a ridiculously huge area of damage, big enough to fit the Councillor and myself in, and obviously a serious trip hazard on a well used footpath between streets.

It’s fantastic when a campaign starts to build momentum and people start listening -but one success does not mean that this gnome rests easy and shuffles off to the local Retirement Gnome (which has had more local attention over recent years than you’d think…). No, the fight with my shovel, camera, hi-viz and Twitter continues. So come on, where are YOUR potholes and dodgy pavements?