Saffron Walden appears to have received ‘assurances’ that the third hour of parking on the Common will not be charged for as of August 1st.

However, in Dunmow a similar ‘local convention’ for parking has been in place for some time, with Essex Cllr Susan Barker (who is thought to be leaving her Dunmow seat at the next election and shift ward to Stansted 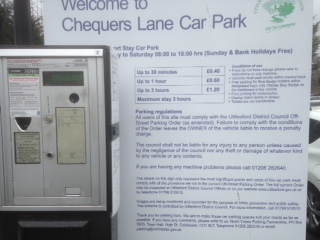 ) giving assurances that there will be no charge or fine from 5pm to 6pm. This bizarre ‘Not Charging but Not Signing’ situation applies to all 4 car parks in Dunmow!

How difficult is it to change the signage? And why are councillors giving ‘assurances’ on parking without committing to putting up the relevant sign that locals and visitors alike can trust?

Whilst this may benefit locals in the know, tourists to the historic market town of Dunmow have no idea that this is in place, and either rush back from their tea and cake and shopping to beat the meter for fear of a parking fine.