R4U) believes that UDC’s faulty Air Quality Action Plan that was rejected last week was a deliberate attempt to manufacture evidence to support a politically motivated Local Plan to allow mass-building on the east of Saffron Walden.

R4U, the second party at Uttlesford District Council, has been very critical of the way the Local Plan is being developed by the UDC administration, and in particular the evidence is being produced with the aim of supporting where R4U claim the UDC Cabinet has already decided they would like to build. Last week a key UDC document, the Air Quality Action Plan, was thrown out at a formal scrutiny review. R4U’s Cllr John Lodge pushed for the rejection of the document at the review.

Cllr Lodge is R4U chair and a district councillor.  R4U has become more vocal over wide-spread concerns with the Local Plan after it was revealed that cross-party meetings were cancelled, crucial evidence was missing or being supressed, and a cabinet member claimed that the plan would be based on communities taking their ‘share’ and not on evidence.

Cllr Lodge said: “This lies squarely at the feet of the UDC Cabinet. In the summer the UDC Cabinet made up its mind to try to push through mass housing development in Saffron Walden and Great Dunmow, and now it seems that this report was manipulated to create biased evidence.  This coupled with the recent discovery that UDC thinks that less than 1% of new homes are ‘worthy of consideration’ in places where Cabinet members live, and that many required Local Plan studies are missing, means that Uttlesford taxpayers are facing the very real likelihood of a second costly £2m Local Plan rejection.” 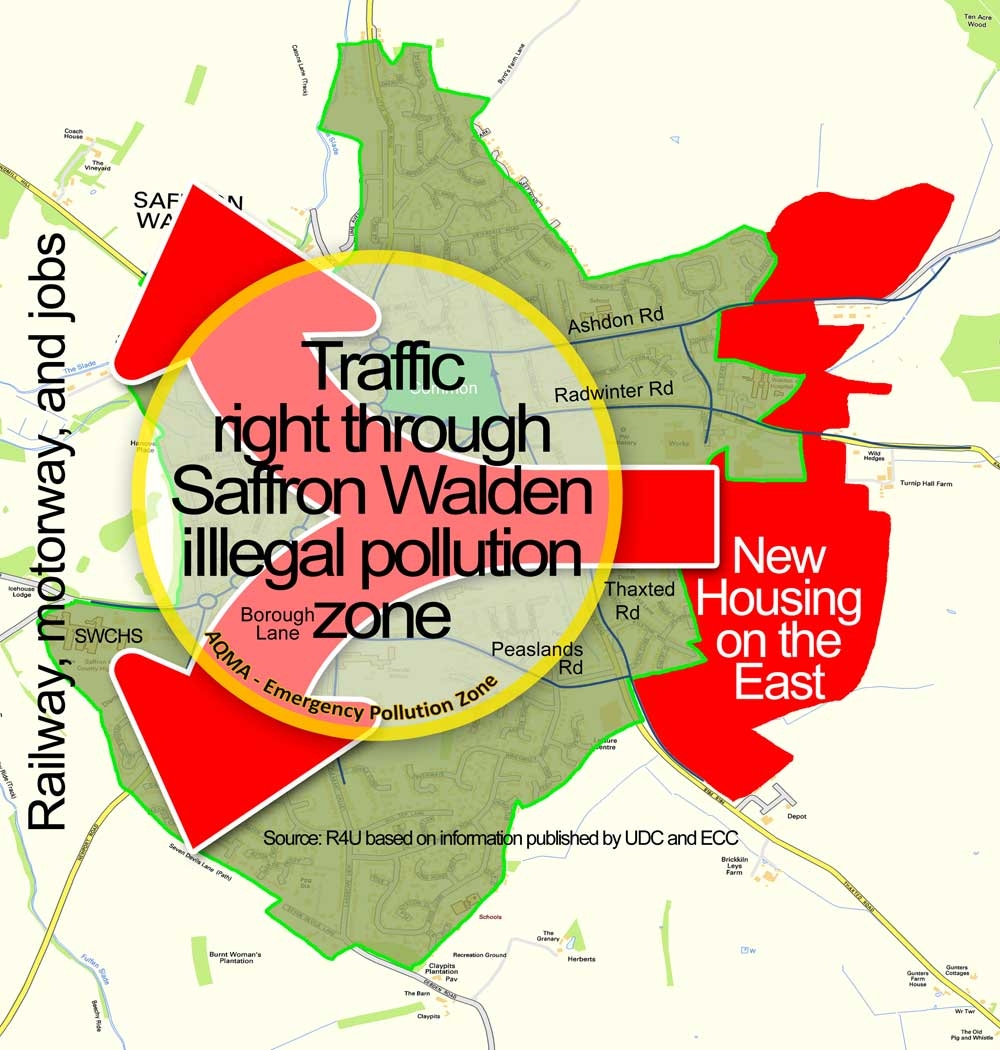 “UDC is required by government to produce an Air Quality Action Plan for Saffron Walden because air pollution is above safe and legal levels due to a failure to plan properly for the future. What was produced, for what they have been calling their ‘Conservative Local Plan’, was grossly inadequate and a crude and damaging attempt to justify new housing on the east of town by suppressing the real illegal pollution problems. Their document pretended that 2,400 new cars don’t exist from 800 houses they’ve recently approved and a further 800 they’d like to push on the town. And it avoided answering the difficult questions that DEFRA requires for such a study. Now this study has been rejected, it must be redone properly. The UDC Cabinet has shown again that they don’t learn from their mistakes, don’t act on behalf of the vast majority of residents, and can’t be trusted with the future of our towns and villages. R4U will continue to hold them to account and advocate for residents.”