To support and voice residents’ concerns, R4U has filed a formal objection with the Essex County Council Highways Authority about UDC’s latest traffic light and one-way scheme in Saffron Walden.

ECC recently announced their intent to undertake UDC’s traffic changes to Saffron Walden roads to allow more large-scale homebuilding on the east of town. The scheme replaces the roundabouts at the junctions of Newport Rd and London Rd with traffic lights and no-entry signs to stop vehicles going up Borough Lane. The effect of this will be to close the east-west HGV route and send all in-bound traffic through the town centre. The centre of Saffron Walden already has unsafe levels of pollution, which the most recent study shows [PDF] has got significantly worse over the last 6 years.

Residents must be heard

Barbara Light (R4U)
Saffron Walden District Councillor Barbara Light said “Ward councillors Sharon Morris and I, with the  support of other R4U town and district councillors, have spent the last week talking to residents, knocking on doors, meeting them in the market square and at our surgeries, and through social media and email. We’ve reached thousands of people and they are outraged by this appalling scheme that will close the east-west HGV route and send all in-bound traffic through the town centre. There hasn’t been a Public Consultation on this and UDC have removed the Town Council’s veto so they can’t block the scheme. Whilst the county and district councils may be denying them a voice, we won’t. We have now sent our initial objections to ECC [PDF]. If UDC and ECC continue to refuse a Public Consultation on this, we will consider running our own. Residents’ voices must be heard.”

Cllr Light continued “Here’s a sample of some of the things residents have said on Facebook: Nadia called the scheme ‘a very short sighted proposal’ that will ‘result in far greater pollution’; Maryann thought it would make rush-hour journeys much longer from Audley End Station; Scott was concerned that the plans seemed to show footpaths on the busy school walking route ‘being reduced and narrowed’; and Catherine pointed out the 22t weight limit on Debden Rd which cuts off another route. In coming up with the scheme both UDC and ECC thought they could send HGVs up Debden Rd, but because of the weight limit all of the biggest and most polluting HGVs will have no choice but to go through the town centre. It is fatally flawed.” 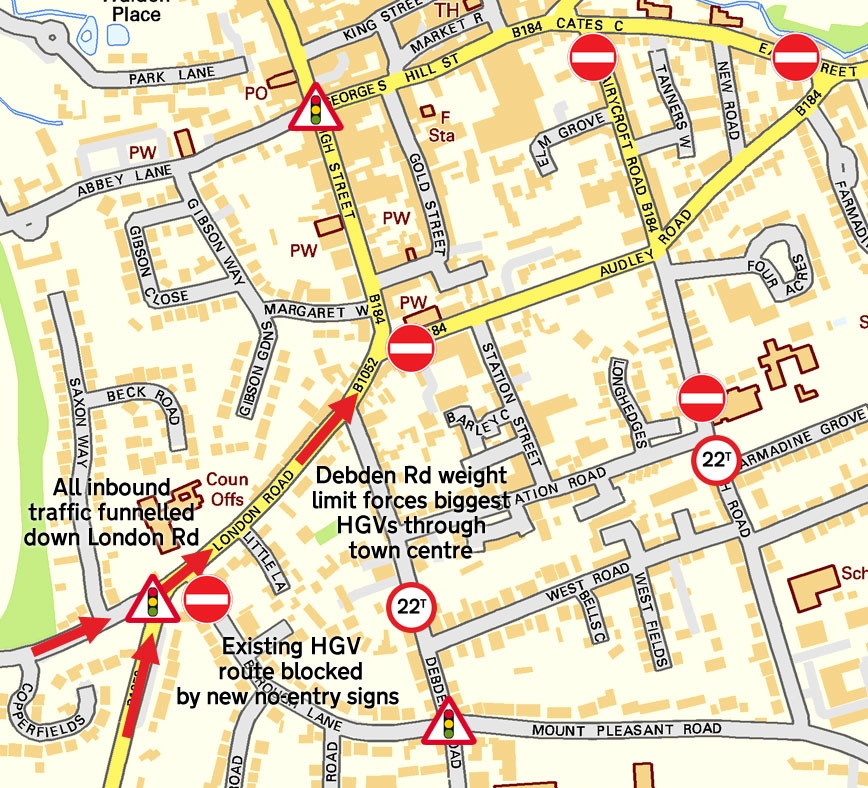 Sharon Morris (R4U)
Cllr Light continued “Whilst there has been no support for the plan, resident Simon said on our Facebook page that he’d ‘keep an open mind’ but wanted the research to show ‘traffic flow will be improved and pollution reduced’. Unfortunately ECC haven’t published any supporting research, so we’ve asked them for it, and will do so again under a Freedom-of-Information Request if they continue to refuse. However contrary to what Saffron Walden’s Essex County Councillor John Moran said when trying to defend the proposals last week, UDC’s latest published air quality report shows that pollution has actually significantly increased everywhere in Saffron Walden over the last 6 years. In fact it is now the worst it has ever been. For the first time the High St is now over the legal limit; and that is before all the HGVs are sent down there. This is the opposite of what he said. Pollution is an invisible killer and needs to be dealt with in our town.”

Cllr Light concluded “Residents are clearly annoyed and concerned about this scheme. Because we’re not a national political party, R4U only has one boss – the residents we represent. So we oppose this scheme for all the reasons above. We have asked ECC to provide the justification and evidence, or immediately withdraw the scheme. Concerned residents can visit us online to keep up to date.”

R4U has been sent emails that confirm that the scheme is UDC’s. However after a public outcry UDC has recently tried to distance itself from the scheme, instead blaming ECC. ECC is the responsible highways authority, however ECC were asked to undertake the scheme by UDC as part of UDC’s 2017 update to their draft Local Plan, and UDC is paying for the scheme with monies it gained from approving new homes in Saffron Walden. ECC wouldn’t be undertaking the scheme if UDC had not asked for it and was not delivering the cash for it.

Send comments to ECC and UDC