Thursday night of 18th December sees a cross-party vote of no confidence in the UDC leadership over their failed Local Plan. How will your councillor vote and what excuses will Tory councillors use if they toe the party line? We recommend residents come along at 19:30 to the UDC offices on London Road to find out.

Back to the future

Back in April this year Uttlesford District Council took a vote to decide if they felt their Local Plan was sound or not. This was probably the most important vote of the councillors’ political careers because it would decide which parts of Uttlesford get built on forever.

The debate was heated because many felt the Plan was politically motivated and lacked the required evidence. Significant efforts were made by the Conservative majority leadership to jam the Plan through and they succeeded: councillors were whipped and the Cabinet Member for the Plan, Cllr Susan Barker, misled the council over the availability of other alternative sites.

None the less many councillors showed their concern. Fourteen voted against it, and they were right because the Planning Inspectorate resoundingly rejected it a few weeks ago. Of the rest, 23 voted for it and 7 were absent, which usually means they felt awkward toeing the party line.

Did your councillor vote in April to approve the unsound Local Plan? You can see below. 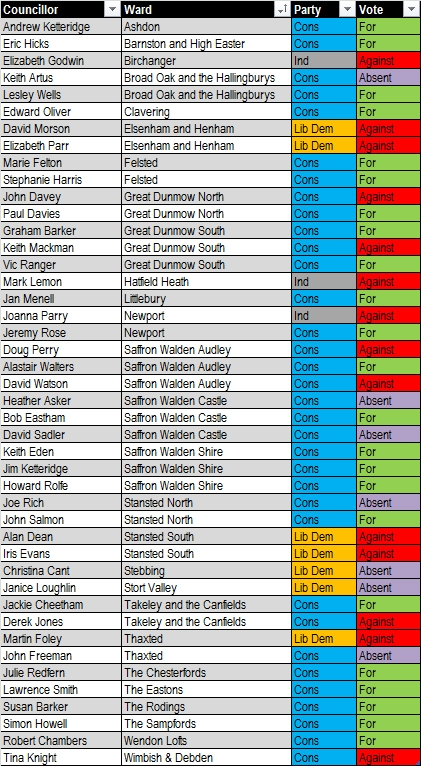 How will your councillor vote tomorrow?

It will be interesting to see how councillors vote in the no confidence vote tomorrow. Will they vote the same way? Are they concerned that over £2 million of OUR money has been spent on the failed plan? Do they still have confidence in the UDC Leader Howard Rolfe, who said previously he was ‘proud’ of the Plan? Do they still have confidence in the architect of the Plan, Cabinet Member Susan Barker, especially after she even went on BBC radio a few weeks ago extolling its virtues?

Where does the buck stop?

Maybe they’ll even try and throw their previous leader, Cllr Jim Ketteridge, under the bus. And whilst his hands are all over the Plan, the current UDC Leader is also responsible as he was previously responsible for community engagement, which was so sadly lacking. But even more importantly, as the current UDC Leader Howard Rolfe is ultimately accountable for the mess and the waste.

The UDC Cabinet isn’t working for the residents of Uttlesford. If the buck doesn’t stop at the leader, where does it?

One Reply to “Dan Starr: Only 23 councillors voted for the unsound local plan in April. How will yours vote tomorrow?”