We have focused our Residents’ campaign on policies to shape Uttlesford’s future. But when the electorate is being so deliberately misled, it is difficult to let it pass.

Recent public statements by UDC Leader Cllr Howard Rolfe are untrue. He has stated in an election video that Saffron Walden and Dunmow “have now taken their fair share” when it comes to more large-scale housing developments and other places will be sought.

UDC Leader Cllr Rolfe can’t pretend or promise that there will be no more houses built in Walden, Dunmow or anywhere else to win your vote – and it isn’t true anyway. In fact the Council of which he is the leader shows an additional 3,000 homes planned across both towns.

So which is true – Cllr Rolfe and the Council can’t both be right when they are saying the opposite?

Then there are the villages too; Elsenham still has 800 homes threatened even though the Planning Inspector said no. Does he think local voters aren’t paying attention or don’t care? 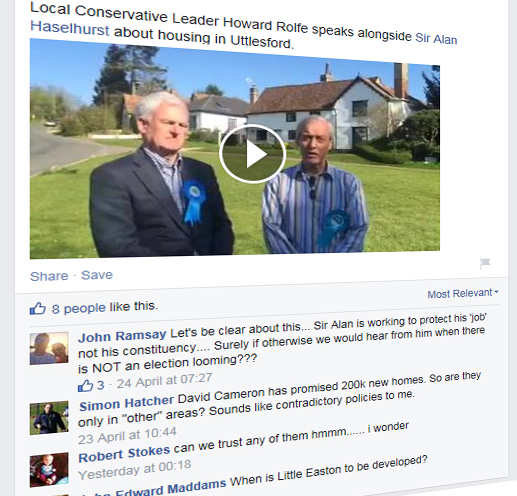 But worse than that, in spite of his ‘no new houses’ pledge, Cllr Rolfe is directly involved in trying to force through 300 more in his existing Saffron Walden ward (maybe that’s why he’s abandoned it for Ashdon). As recently as this March, a letter sent to the Planning Inspector by UDC showed that Cllr Rolfe was involved in a behind-closed-doors attempt to encourage Kier to build on the east of Walden.

How can he pretend no more building when he’s directly involved in doing exactly the opposite?

Our residents’ group has been campaigning for an open and honest District Council leadership for over 3 years. Their poor behaviour is exactly what drove me and many of our candidates to get involved to and try and change things. We’re not politicians. We are residents like you and we’ve had enough too. We need more houses but we need an honest process to establish where they should go.

We deserve more for our taxes, and a Council leadership we can trust again.