While leafleting and canvassing…

Newport has about 950 houses and big thanks to our team who have so far leafleted every house 3 times. The ward includes Widdington and Quendon & Rickling which is about another 400 houses. Having a team to cover Newport has meant Jo and I have had time to leaflet these villages, with help from Judy Emanuel. We’ve knocked on nearly all the doors – a few more to go and we have started going back to the ‘outs’.

We still find a few people saying they don’t know about R4U, but many have seen the sign boards. And when you explain, it all clicks and you hope you have an R4U voter!

Have been thanked several times for explaining on the doorstep how many votes we have. All part of the service – why should everyone understand England’s four tier governance system!? And of course we have to pick out the EU citizens who can vote in local but not national elections. Fortunately no-one has asked why.

Happy moment, leafleting in Wicken Bonhunt (to help out Alan Storah) meeting someone delighted about the prospect of a first grand child. But canvassing in Newport, a lady listened politely and then said her husband had just died. Hope my words were of some comfort. 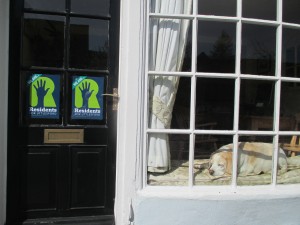 The weather has been good, the dog comes back exhausted from leafleting (so many doorsteps to check out!) and canvassing in cold weather is a good way to lose weight

The next leaflet is due from the printers. Then it will be up before sunrise to catch the early morning commuters

Event of the day was someone driving by on Newport High Street and calling out ‘I’m voting for R4U!’