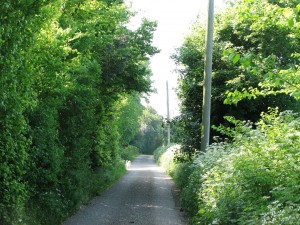 This is Whiteditch Lane in Newport. Here this morning there was a horse, a car, myself and the dog. (Picture is from 2013, wasn’t quick enough today, you’ll need to imagine the scene). We all got around each other very amicably and trotted, drove and walked on our respective ways. 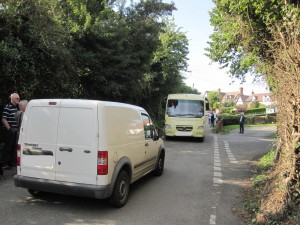 Whiteditch Lane is a Byway, which means it is shared space between all users, is single track and has no street lights or pavements. This one is a dead end and connects with Newport down a blind sunken S-bend, into other roads not much better. Not hugely relevant, but it has no sewerage or mains gas. It currently has about a dozen houses dotted along it, mostly large, set back in their grounds

However it is the subject of around 70 housing applications. To be specific: 15 permitted but subject to a judicial review spearheaded by the parish council, 15 refused but awaiting appeal, 12 awaiting officer recommendation, 15 proposed by the Joyce Frankland Academy on the playing fields, 5 in a row with permission, 2 on a new application and a few other individual houses given permission.

The issue is this: Essex Highways make very clear in their submission to UDC that they consider the byway not suitable for significant traffic. They also say they have no intention of upgrading it. But they nevertheless give these applications a Recommend. When challenged by me, the answer was that each individual site is not large enough to stand the (multi-million pound?) cost of conversion to a standard highway. So if they refuse, or specify major works, ‘it would be challenged on appeal’.

Turn now to the UDC Planning Committee. Their site visit minibus has been stuck up this lane twice, and on one occasion damaged a wall. When they allowed the application currently at judicial review they said they agreed that the byway was unsuitable. But as Essex had given a Recommend, if they refused ‘it would be challenged on appeal’. They told us to go and talk to Essex Highways.

Move now to our recent Annual Parish Assembly. Our County Councillor Ray Gooding was questioned about this. His response was that without a Local Plan Essex can’t consider the cumulative impact, and they are just a statutory consultee, and that …. ECC would be open to challenge.

My view is that either it is agreed that this byway is upgraded and is no longer to be what it is now, and is open for development, or it stays as a byway and significant development is refused. What the various players in the planning system are permitting, despite local protest, and effectively admitting they are taking poor decisions, is housing without supporting infrastructure.

2 Replies to “The campaign for essential infrastructure continues…”