We have been busy since being elected as district councillors a month and a half ago. We are now starting regular surgeries around the Newport Ward, the first on Thursday 2nd July at the White Horse between 10.30 and 11.30am. Please pop in and see us if you have any concerns about local matters – coffee is available! 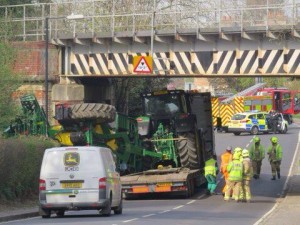 One of the long standing problems which residents raised again while we were canvassing is bridge strikes.

The problem is not just when the railway bridge is hit by high vehicles, closing both the road and the railway, but the many near misses when trucks block the road and cause damage while they attempt to reverse.

The 20 mph sign on the lane up to the Joyce Frankland Academy remains hidden in the undergrowth from when it was pushed over in September last year. And as you can see from the photo it could be lethal for pedestrians or other road users

We have statistics from Network Rail and we have made contact with the Essex Highways Liaison Officer for our area and will be supplying her with information to support an application to the local Highways Panel for improved signage. For example, coming from the south there are seven sets of warning signs. Those at the diversion points do not stand out and their wording is misleading saying ‘Alternative route to Saffron Walden avoiding low bridge’. Drivers not going to Walden assume it is fine to carry on through Newport. Our proposal will probably be to reduce the number of signs, replace the ineffective signs with bolder ones, and alter the misleading wording
.
Newport is also plagued by speeding drivers along the B1383. The 30mph limit is not being observed particularly by some drivers on entering the village, and leaving it. There are various options but the most obvious one is to have Vehicle Activated Signs, the same as every other village along the road. Essex Highways previously refused these on the grounds that speeds were not excessive. We think this is incorrect and we will be working with our County Councillor, Essex Highways and the Parish Council to have this looked at again. We will keep residents informed, but it may require a petition, something which is catered for on the application form for highway improvements.