The scaffolding currently on the Town Hall in Saffron Walden is only there to stop bits falling on the public as there is no money to properly fix it. Built in 1761 and historically listed, the landmark is a visible metaphor for the town’s finances.

This week in a joint press statement, Saffron Walden Town Councillors from Residents for Uttlesford, Liberal Democrats and Labour have announced that they intend to fix the poor financial state inherited from the previous Conservative Town Council.

Twenty-fifteen has seen a complete change at Saffron Walden Town Council, with new councillors, parties and officers. As a result of the May election, the leadership of the Council also changed from the Conservatives to local party Residents for Uttlesford. As Council Officers start to prepare the 2016/17 budget, at the most recent full council public meeting they described the state in which the Town’s general financial reserves have been left by the Conservatives as “woefully inadequate”.

After the meeting Cllr Paul Gadd, leader of R4U at the Town Council said:

“As officers have started to prepare the 2016 budget, the level of financial mismanagement by the previous Conservative Council has become very apparent. Their general financial reserves were already underfunded, and to avoid putting up taxes before the election they spent more than half of the remainder in their farewell budget. As a result these reserves are now more than £400,000 below their recommended level.  In fact if they hadn’t raided the reserves they’d have been forced to put up Council tax by 11% just before the election.”

“At last week’s Council meeting all of the Conservative councillors even voted to prevent officers giving their public presentation about the poor state that they’d left Council’s finances in. They also invented a completely untrue ‘65% tax hike’ story to try to deflect responsibility from themselves. This is unacceptable and residents expect honesty, transparency and accountability from their councillors. Saffron Walden needs get back on a long-term stable and secure financial footing.”

In 2015 more than 80% of Uttlesford Council Tax went to Essex County and Uttlesford District Councils, with 14% to the Police and Fire services. A relatively small amount, only 5p in every £, goes to town and parish councils, such as Saffron Walden Town Council.

In their budget presentation, which Conservatives tried to block, Town Council Officers showed that the previous Conservative led-Town Council had: spent more than they got in from Council Taxes; failed to maintain the Town Hall; and drained down the general financial reserves. This has left a significant gap in the towns’ finances.

Following the Conservatives claims, new Town Clerk Lisa Courtney has sought to bring clarity to the situation and clear up the misinformation.

“Saffron Walden Town Council is considering its budget for 2016/17 and, as part of this process, an estimate of costs for a number of long term projects have been considered. These estimates include budgetary costs for the refurbishment of the Town Hall along with long term maintenance and reparation programmes for a number of other Council owned facilities and services. While these estimated costs indicated a 65% increase the intention was to demonstrate the budget as a whole for these long term programmes; there is not an intention to carry out all of these works in one year which would indeed have resulted in a 65% increase – rather it is anticipated that these will be planned, phased works over a 3-4 year period.”

“It is too early to pre-empt if the [Council Tax] precept will be increased and this has been and will continue to be a matter for consideration and agreement by Council over the forthcoming weeks.”

The Conservative group at the Town Council continue to spin the their tax-hike claim even though has been shown to be unfounded and rejected by all the other parties and the Town Clerk. They did get the local BBC News interested and the story below resulted.

Save the Town Hall

A long-term lack of maintenance has put the Town Hall in a particularly perilous state. Labour’s Cllr Arthur Coote said:

“The situation has been made worse because the Conservatives failed to maintain existing community properties and assets. The Town Hall has been so badly neglected that it will now require hundreds-of-thousands pounds just to fix. In fact we’ve even had to put up emergency scaffolding just to stop bits falling onto the public. It’s a shocking situation and we need to save the Town Hall.” 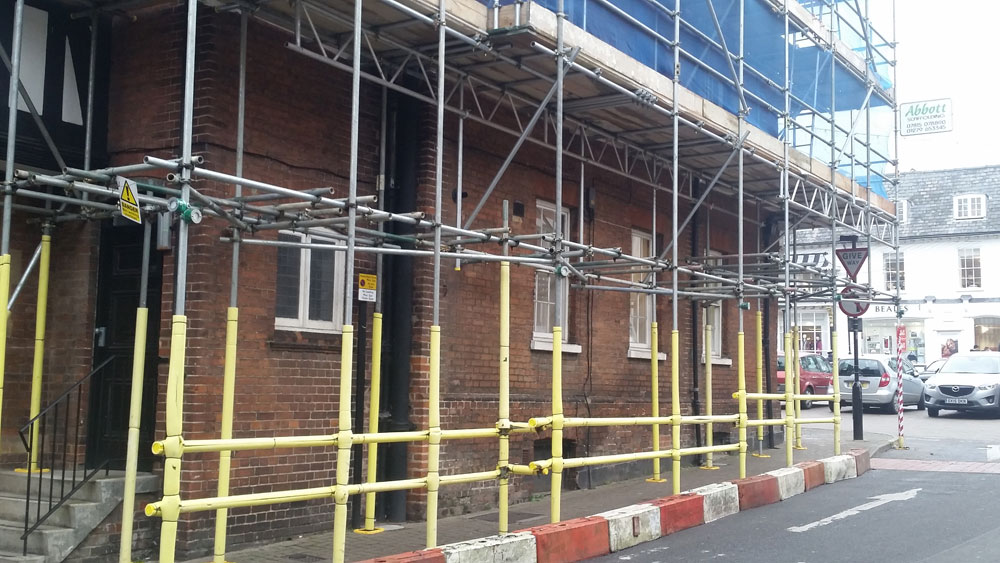 Be part of the solution, not the problem

R4U, the Lib-Dems and Labour are committed to fixing the problem. Former popular mayor and Lib-Dem Cllr Mike Hibbs said:

“It is disappointing that the remaining Tories have decided that it’s not in their interest to help solve the problem that their previous Council created. However they are in a minority and all the other parties are united and committed to jointly coming up with solutions. It will be tough because of the size of the financial hole, but we have a number of options at our disposal. Whilst none are easy, we must find a way to balance our books, maintain the Council’s assets and build reserves back up. Officers will be considering options and making a recommendation to the Council during the next 6 weeks.”

It is anticipated that the Saffron Walden Town Council budget will be agreed and set by the end of January 2016.