The Uttlesford Local Residential Parking Standards drawn up 6 years ago doesn’t mention tandem car parking. Presumably no-one in 2009 thought that layouts with parking in lines, with the inside cars inaccessible, would be considered. The Standards are of course the bare minimum. Developers, to squeeze more houses onto their plots while claiming to comply, now routinely plan parking in lines because it uses less frontage

An example is the Bloor Homes Frankland Mews development in Newport. (The one featured in the papers last year, under its previous name Carnation Nurseries, when the site was flooded by the Cam bursting its banks) 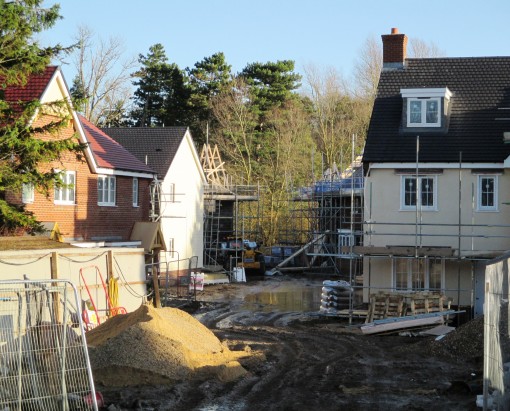 Standing water present, even as they build it!! Man at the gate joked about photoshopping the water out…

Most of this 21 house site has tandem parking. On the layouts the blue and orange blocks are also parking spaces included in the requirement, but left empty of vehicles on the developers plan. 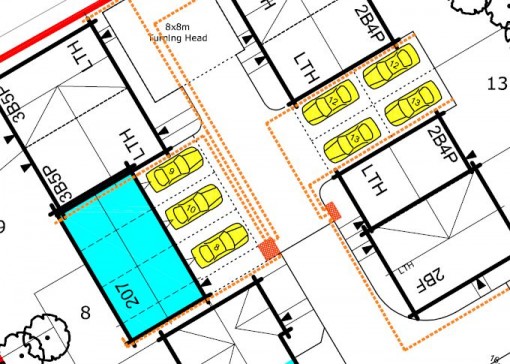 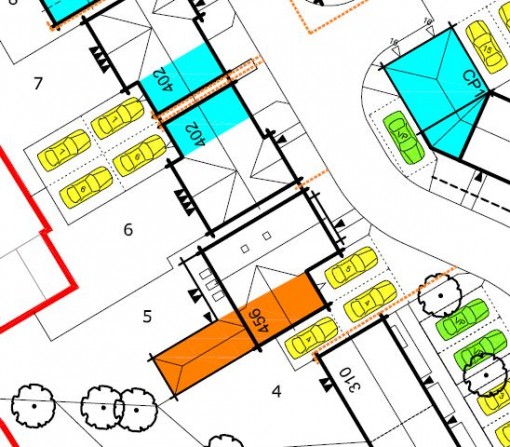 I’ve heard members of the Planning Committee say ‘we don’t like tandem parking’, but that view doesn’t often seem to translate into action. Another development was passed last month for Newport with an arrangement which will require cars to be moved out onto the main road to release the trapped vehicles.

What do people think about two and three in a line parking? Maybe in some locations it works? Should we be putting to UDC that the Standards are out of date and rules for tandem parking should now be included? It is difficult for officers and councillors to deal with what they may consider unreasonable if the policy to judge against is silent.

The Standards also say ‘1 space per 2 dwellings for mobility scooters’, which of course everyone sensibly ignores as gross over provision. But it ought to provide something enforceable. And perhaps wheelie bin spaces, being a competitor for parking spaces, should also be in the same set of standards?