All UDC councillors have 3k per year to distribute to good causes within their local communities. It comes from the ‘New Homes Bonus’ which the government pays to councils for each new house built in the district. After the election, R4U councillors put out calls to their constituents to ask how they would like the monies to be spent. In Newport, Cllrs Neil Hargreaves and Joanna Parry have put their allocated budget towards a number of local charities & causes. 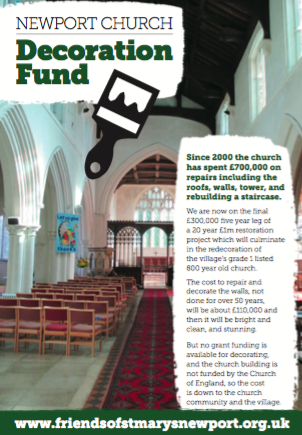 These include help for repair work on local churches and support for the Brownies, Scouts, Newport Youth Centre, the two junior schools, three toddler groups and some funding for a hairdresser to visit old people

Cllr Hargreaves said “the response we have got has been excellent. Some recipients have been amazingly grateful, even when we explain that it is effectively their own tax money!”

Support for this district-wide initiative is clear, as one beneficiary recently posted on their social media page:

RICKLING PRIMARY SCHOOL FUNDRAISING.
The Friends of Rickling School are most obliged to Councillors Jo Parryand Neil Hargreaves for their continued support towards our local village school. This year they will be making a £500 contribution to our fundraising efforts which is greatly appreciated by the PTA, School and Children.
Many thanks Councillors.

The deadline for applications to individual councillors funds is rapidly approaching, and all requests have to be received for consideration as soon as possible. Residents are advised to contact their District Councillors as soon as possible, otherwise any unspent money will be subsumed back in to general council funds.