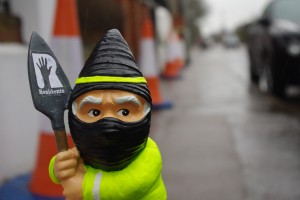 Freezing my hi-viz off on Ashdon Road

How do Gnomies? It’s still a bit bleak outside at the moment and I’ve been a tad chilly in my shed. Luckily with a fairly mild winter we seem to have escaped too many potholes so far. But I’ve been watching the Hoo-Haa going on at the moment about UDC wanting to remove parking from a mile of the Saffron Walden’s roads.

Down the allotment, I’ve been asked “how do these things get decided?” and it’s a fair point.

Well it’s seems more complicated than it should be. UDC and a number of other district councils and ECC jointly set up a quango* to run car parks, traffic wardens and changes to traffic regulations. That means yellow lines to you and me. This quango is snappily called the North Essex Parking Partnership (NEPP). Councils, anyone else for that matter can ask the NEPP to makes changes, called Traffic Regulation Orders or TROs to those in the gnow. The NEPP hiviz guys then move these requests through a formal process. See the picture below. You follow the arrows and get a result.
During the first few steps they create an Application Form that shows all the details. They have to review the evidence, and scope, cost, justify and score the proposal. Then after some internal stuff they ask the public for their opinions before deciding if to order the yellow paint and signs or not.

So that’s what is supposed to happen. In practice it seems that UDC or ECC just decide that they want to do, shortcut the process, expect NEPP to stick notices on lampposts, and assume that no one will complain. When folks have a moan, they are generally ignored by ECC and UDC who just blame the NEPP. It’s the perfect local government fudge for them. They do what they want and everyone is so confused they all blame eachother. But it sucks for democracy.

So then me and my mates had to have a gander at what happened in SW:

In 2013 UDC wanted to create a ring-road [sic] though the centre of the town by removing all the parking. It was part of their Local Plan. UDC’s head of planning wrote to the NEPP to in-effect tell them to start ordering the yellow paint, and helpfully explained where he wanted it. I’ve seen his letter as I have my sources. But this was not for all the same roads as the current proposal and the details were different. When the Local Plan was rejected these old proposals were thrown away. 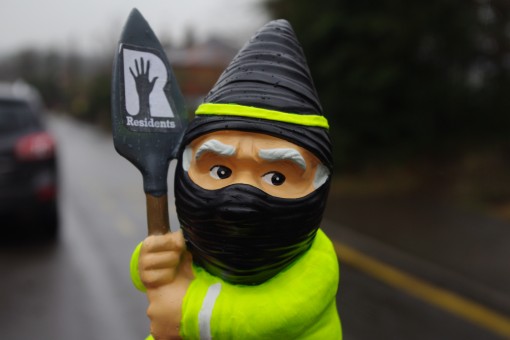 In South Rd SW, where roads are chaos and school parking is needed for parents…

In October last year UDC wanted to kick start it again as they were working on a new plan. So they stated a new proposal. Only by this time the NEPP had changed its process.

Sick of getting the pointy end of the spade when residents didn’t like schemes foisted on them by UDC and ECC, the NEPP had changed the rules in the last 2 years. The NEPP now required new TROs to have “local support where at least 50% need to be in favour” and that “Those putting forward schemes are required to get the approval of the Town or Parish Council and District or County Councillor.“

UDC didn’t get it. They never asked the Saffron Walden Town Councillor or any councillors in the town for formal approval. And many residents certainly don’t like it.

So what happens now? Well the process should be stopped, and it could be by a legal challenge. But UDC will probably try to force it through. After all they have just barred you and me from providing feedback on the new Local Plan sites, so they’ll probably just do what they want to with the roads anyway.
You have to remember all of this for the next local election, my friend. If they won’t listen to you, get some new people in that will listen to residents.