Our local roads were in chaos last night and most of today as Newport’s troublesome railway bridge flooded again. The first car was stuck in the water at 6.30 last night. By the morning rush with Joyce Frankland traffic and all the other traffic backed up in both directions, and local rat runs clogged. In the absence of traffic police, the only activity had been Essex Highways putting up a warning notice right in front of the floods. 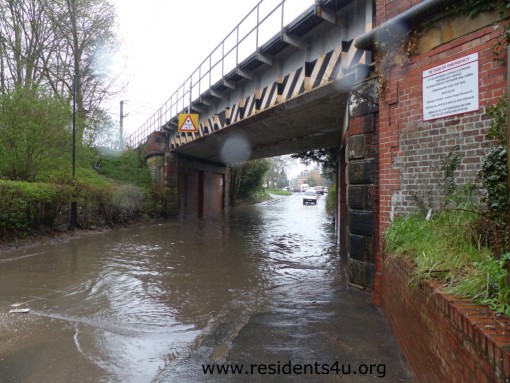 I called the Essex emergency highways number and (after the usual wait listening to how my problem might be resolved by looking at their website) I spoke to a helpful lady who called in the jetting team and referred the matter to the area Drainage Engineer. The regularly blocked drain under the bridge is a long standing problem and I’m following up with our County Councillor as to whether regular maintenance has been done, and what measures are to be taken to improve it.

Traffic backed up throughout the village -no signs to warn commuters until it was too late.

But the big question being asked by local residents on our village facebook, and by parish councillors on site, is WHERE WERE THE TRAFFIC POLICE? A resident reported the problems on 101 last night, but it seems they just passed it on to Essex.

At a recent Newport parish council meeting an Essex Police sergeant confirmed that there is effectively no traffic police team covering Uttlesford except on the A120 and M11. Essex has the second poorest funded police force in the country and today we saw just one of the consequences of that.

Warning and diversion signs were needed at the right places – there is a signed high vehicles diversion which people could have been directed to, but vehicles just kept on piling into the village all this morning, unaware. The jetting team were struggling and the parish councillor said they needed traffic management to protect them but the police were nowhere to be seen. Traffic can be nursed round Bridge End but it needs police management otherwise it blocks solid.