Residents for Uttlesford (R4U) has expressed significant concerns about political interference in the new Local Plan and that UDC is again failing in its legal obligations. UDC is currently developing a new Local Plan after their last one was rejected in 2014 by the Planning Inspectorate, at a cost of over £2m to Uttlesford taxpayers.

John Lodge (R4U)
During the summer school holidays, Uttlesford District Council wrote to each of the town and parish councils informing them of its preferred sites for the 4,600 additional new homes to be built in Uttlesford over the next 15 years.  UDC’s 15-year proposals would see the launch of a new settlement, 600-750 new houses built in each of Saffron Walden and Great Dunmow, and 30 houses in each of their target villages.  This is in addition to the 1,000s of homes already approved. The council is also still targeting Elsenham for new development even though it has been twice rejected, by the Planning Inspectorate and Secretary of State.

R4U’s Chair Cllr John Lodge said “The Local Conservatives have finally abandoned their pretence of creating an inclusive, evidence-led Local Plan for residents. It now really is all about them. Earlier this year the Tory UDC Cabinet removed a public consultation, but they have now taken further steps. They have now branded the plan as the ‘Conservative Local Plan’, cancelled all the meetings of the cross-party Local Plan working group before they finally announce where they want to allow new homes, and refused to take any comments from residents at their current exhibitions.”

Uttlesford Conservatives have politicised the Local Plan, shutting out residents and other parties.

Cllr Lodge continued “What has also been exposed is that they have abandoned any pretence of using evidence to guide the plan. Last week UDC Cabinet member Cllr Susan Barker announced at a meeting that their Local Plan wasn’t about picking the best location in the district for new homes, it was about communities taking their ‘share’. ‘Share’ is not what planning law requires – it requires the best location be selected. But it has also become abundantly clear that the ‘Conservative Local Plan’ is a NIMBY plan and nothing to do with share anyway. It disproportionately targets towns and villages where the Conservatives don’t have many councillors and UDC Cabinet members don’t live, for example Elsenham, Henham, and Saffron Walden. In fact the UDC Cabinet has proposed less than 1% of the additional new homes for where they live [ed – 43 new homes out of 4,600 additional required]. Let’s be clear here – theirs is not a plan for residents, it’s a plan to suit themselves; and it is political meddling in the extreme. It is in clear breach of planning law and we will be writing to the Planning Inspectorate again.” 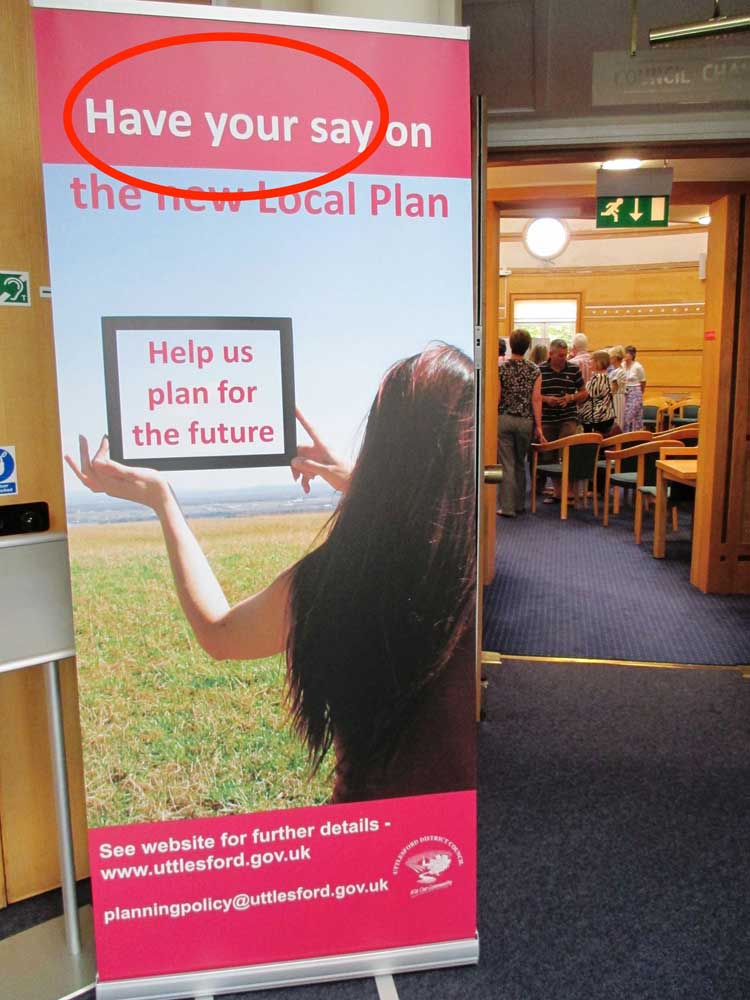