A major new Uttlesford Transport Study, which has been finally published by UDC as part of their draft Local Plan, highlights past failings and recommends that Saffron Walden and Elsenham should be off-the-table for major new development without huge investments in new roads. The study also expresses concerns over gridlock in Great Dunmow, Newport, Stansted Mountfitchet and Takeley due to new development.

Uttlesford District Council is close to releasing its new draft Local Plan with the locations where it will put new houses over the next 16 years. UDC’s previous proposals put the majority of new development in Saffron Walden, Great Dunmow, Elsenham and Henham, but they were rejected by the Inspector in 2014; In 2016 UDC’s revised plans were withdrawn again. As UDC gets ready to reveal its new Plan it has published several key reports. These include the long-awaited Transport Study which reviews the district’s road network and looks at which places for new homes would cause the least congestion.

The Transport Study supports what local party Residents for Uttlesford and residents groups have been saying for the past 5 years – many of Uttlesford’s roads are already at or over capacity and can’t cope.

John Lodge
R4U Chair & Leader UDC
R4U’s chair, Cllr John Lodge said “This new traffic study shows how the UDC Cabinet has been getting it wrong for years. It is patently clear they should have started by looking at traffic, not by doing it at the end. But even last October, their Local Plan leader, Cllr Susan Barker was proposing to build 1,000s of homes in Saffron Walden and Dunmow, and was still considering the huge new ‘Hellsenham’ settlement. That was in spite of numerous Planning Inspectors and the Secretary of State having told her ‘No’. At the time we made it clear to the Planning Inspector that the traffic and air quality studies were still missing and she was forced to withdraw the plan again after it had gone to press. The new transport study makes pretty grim reading; the larger existing settlements in Uttlesford, such as Saffron Walden, Great Dunmow, Stansted Mountfitchet, Newport, and Takeley, can’t take mass home-building without £millions put into new roads, none of which is proposed.” 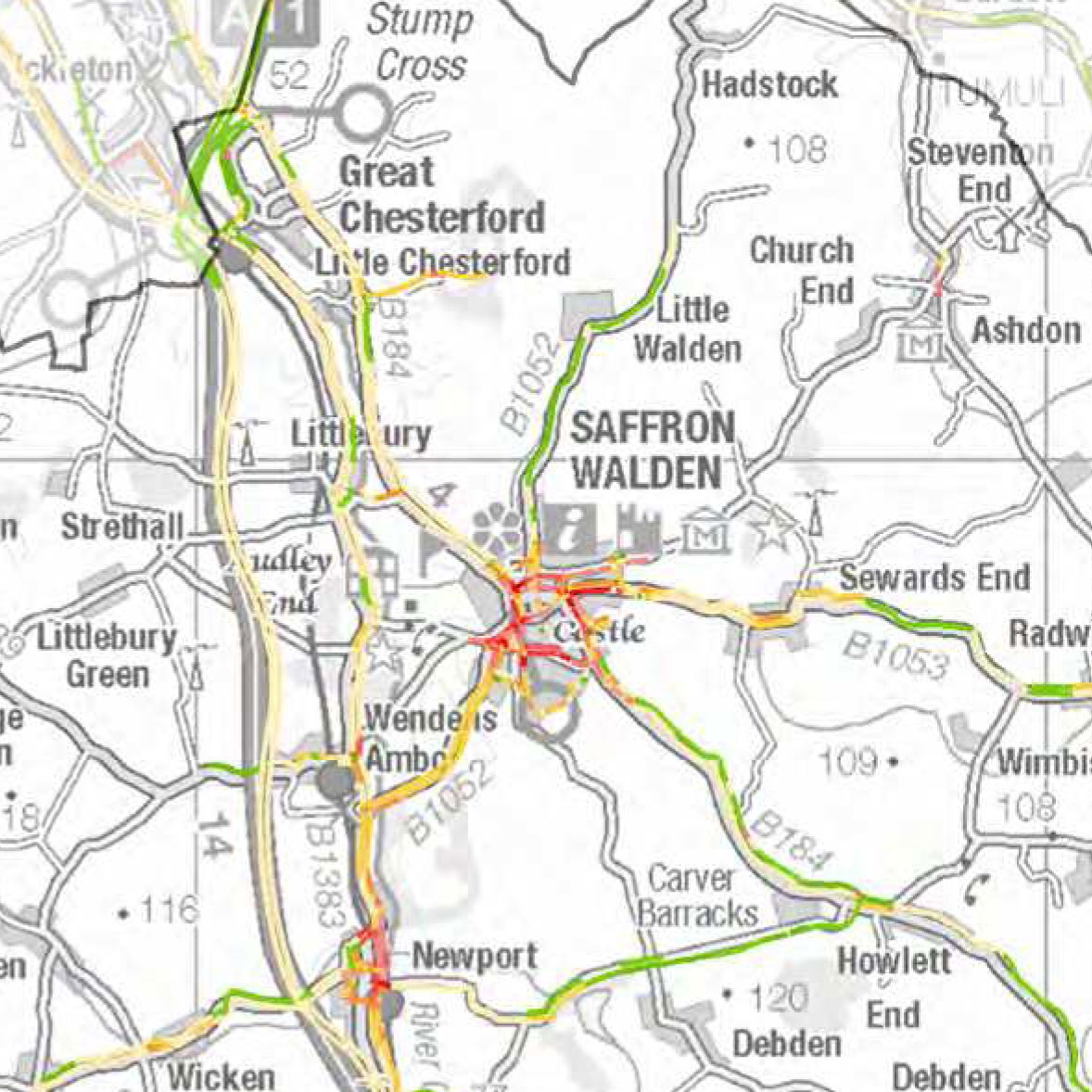 The new Transport Study finds that many roads in Saffron Walden, and all along the B1383, including in Newport, are already or will soon ‘exceed their capacity’. Source: UDC.

John Lodge continued “The study is particularly damning for UDC’s infamous eastern-link-road-to-nowhere in Saffron Walden. It is a myth and a white elephant. The study shows it will in fact actually worsen traffic and so pollution across the town. It goes on to say that no new mass housing should be proposed for Saffron Walden as the roads can’t take it, and even smaller developments will require detailed traffic and air quality assessments before they could be considered.”

Work has already started on half of the eastern link-road in Saffron Walden, even though the Transport Study makes it clear that the road is too small to do what was originally intended and will in fact make traffic worse in the town. It says only a ring-road will fix the town’s traffic (and pollution) problems.

Cllr John Lodge concluded “The study is as equally dismissive of UDC’s previous proposals for a new settlement in Elsenham and highlights concerns for the Dunmow area due to capacity issues on the A120 and M11 right from Harlow to Chesterford. There are also problems all the way along the B1383, which of course is also the relief road when there are any motorway problems. We are still waiting for the air quality study and will carefully review UDC’s draft plan when they release it in a few weeks; but after this report, we’d expect mass building in Saffron Walden and Elsenham to be off the table. We’d also expect to see solutions to the traffic problems for all the other settlements facing new developments.”

Petrina Lees (R4U)
Speaking about Elsenham and Henham, Petrina Lees, one of R4U’s district councillors for the villages said “When elected in February, R4U immediately asked me to join UDC’s group that is providing oversight of the new Local Plan, so finally village residents have a seat at the table. This report makes it crystal clear that a new Hellsenham settlement should be completely scrapped as it would create ‘severe stress on the local road network (up to 225%)’. This same fact has been highlighted for 10 years by residents through their own traffic studies. UDC’s £2m Local Plan failure over Hellsenham in 2014 was indicative of what happens when sites are chosen on what appeared to be political whims rather than using evidence. Hellsenham never was stainable and should never have been considered in the first place.” 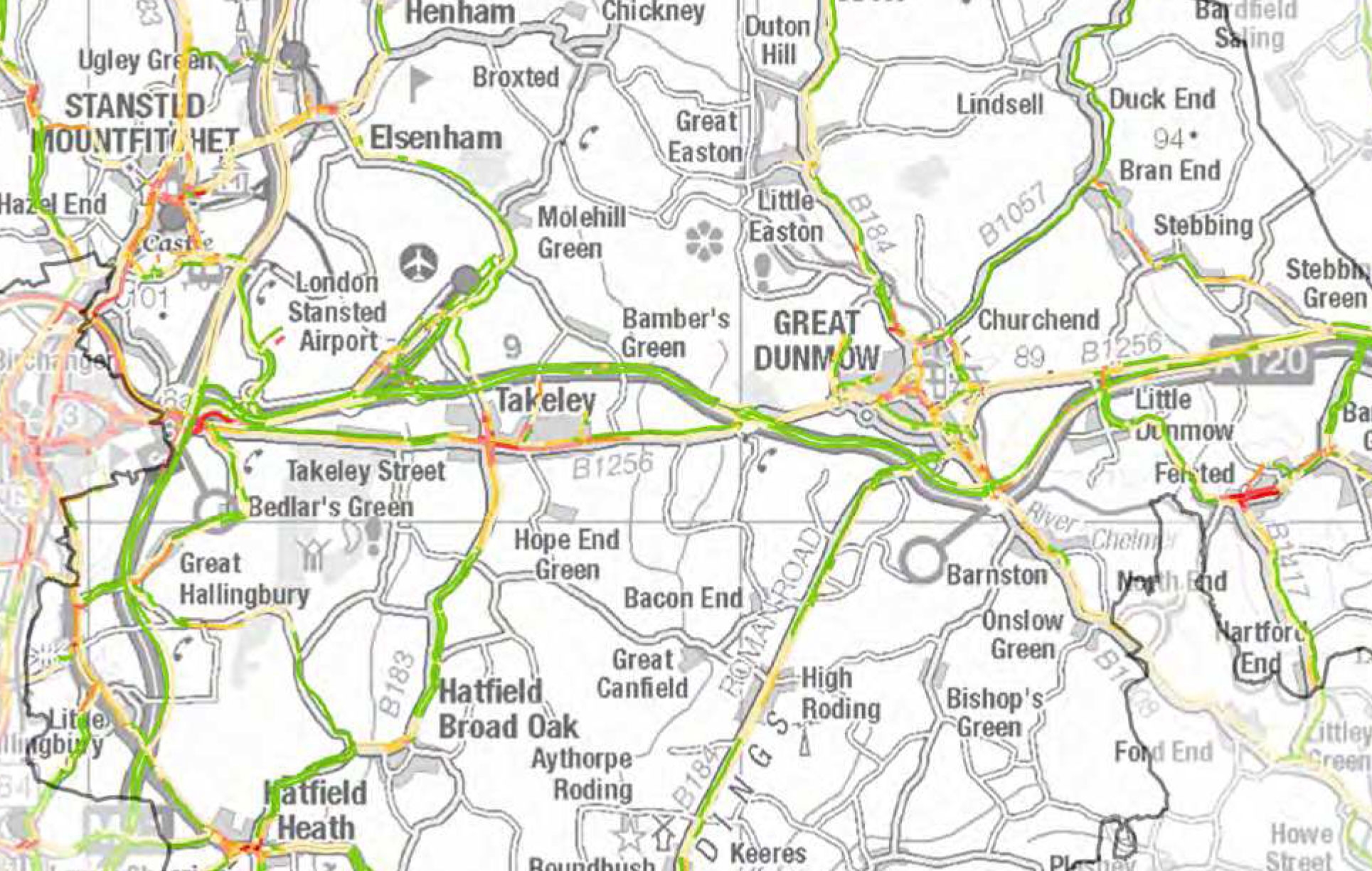 Alex Armstrong (R4U)
R4U’s Cllr Alex Armstrong from Dunmow commented about the south of Uttlesford. He said “This transport study rings alarm bells for Dunmow residents and those in nearby villages. it indicates that UDC will be proposing two new settlements for the Dunmow area. The first one being a huge extension to the north-west of Dunmow, effectively more than doubling the town, consuming Little Easton and joining it with Takeley. And the second new settlement, further along the A120, would join Felsted and Stebbing with Braintree. This is on top of the 1,000s of new homes that Dunmow and Takeley have already taken. The study shows that both main roads from Dunmow to the A120 will be over capacity within a few years, as well as the A120 itself and a 25-mile stretch of the M11. These are huge and expensive issues that need to be resolved. Residents now need UDC to publish their draft Local Plan so we can see what their solutions are.”

One Reply to “Local Plan Transport Study confirms many Uttlesford roads at capacity, Saffron Walden should not take additional mass-housing and eastern link-road is a ‘myth’”