Residents have been celebrating in Newport after they won two appeals against the unsustainable development of more than 200 new homes in their village. The appeals were fought by a combined team of parish and district councillors and UDC officers.

Newport has been the focus of developers over the last decade. The village has grown by more than 50% since 2011 and these new developments would have significantly expanded the village further.

Neil Hargreaves (R4U)
R4U’s District Cllr Neil Hargreaves said “This latest application in Newport was for 74 houses to be built and would have seriously changed the character of the area.  It came hot on the heels of an application from a different developer to build a 150 house estate on the other side of the same stretch of road.  Both developers took their applications to appeal after they were originally rejected by UDC Planning Committee. The excellent support and huge amount of work by our Parish Council team and UDC Officers means we have been able to fight off both of these completely inappropriate housing plans.”

“It’s been a major and costly undertaking for the Parish Council and numerous village residents to fight these appeals” said Judy Emanuel, Vice Chair of Newport Parish Council.  “However, it is evidently money well spent and I would say has united the village and further strengthened our sense of community.  The two decisions also support our draft Neighbourhood Plan, which rejected these sites. We hope our Neighbourhood Plan will be approved during 2020.”

After both appeal refusals Newport Parish Council met with UDC Officers to discuss and review how they had approached the planning appeals. Cllr  Judy Emmanuel said “We learned so much by going through that process; it made a huge difference to a new subsequent appeal which we are now awaiting the outcome of, during which we all worked highly effectively as a team.  In addition, we are seeing some fantastic quality output recently from our council planning team in response to other applications.  We are now starting to work with neighbouring parish councils to share knowledge and experience and it is a focus for 2020 to develop those relationships further.”

In parallel to supporting appeals, R4U councillors continue to work hard to put residents first, including more changes to how planning is approached at Uttlesford District Council.  These changes are designed to ensure that a tough line is taken against poor and speculative applications which deliver no benefit to the community; and that they can be vigorously challenged by residents, the district, town and parish councils. 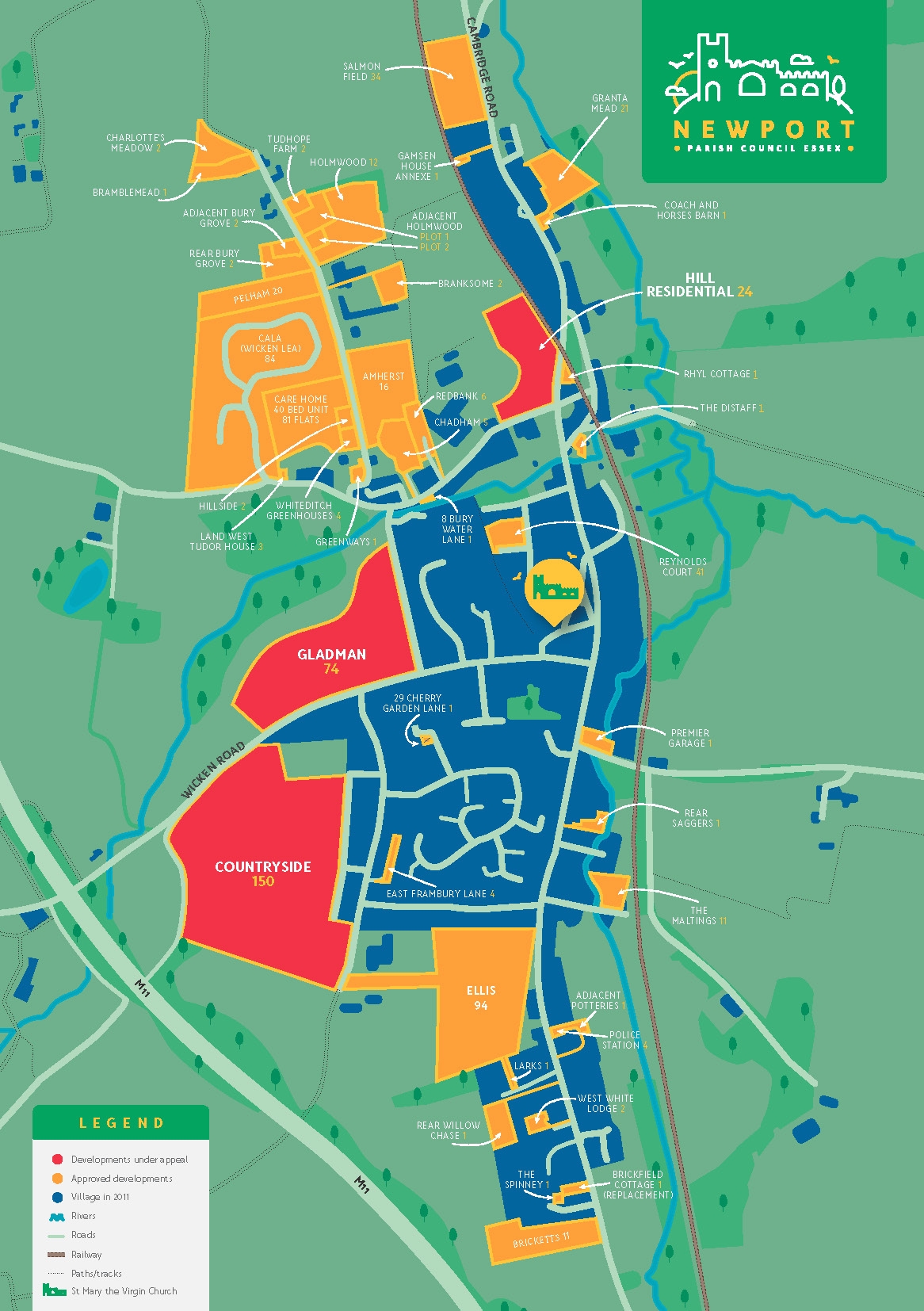 Newport has expended by more than 50% since 2011. This map, produced by Newport Parish council, shows the existing village in blue and approved developments in orange. In red are those that have been refused by UDC but the developers have appealed. The Gladman and Countryside developments to the west of the village are the ones that have just been refused on appeal.