Last night the full District Council met to discuss the Local Plan process and instead demonstrated all that is broken with local politics. The losers were the residents of Uttlesford and the institution of local government itself. Despite calls for cross-party unity, transparency and collaboration, exactly the opposite happened. 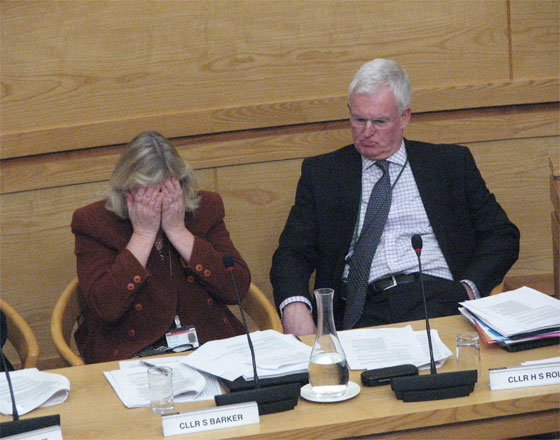 The meeting was attended by a good number of local people that turned out to see their council in action. It began with a number of public speakers who made it quite clear that residents are outraged that £ millions of OUR hard-earned money had been wasted and no one was stepping up to accept responsibility, or even apologise. Speakers included our own prospective candidates, local family champion Sharon Morris and experienced financial expert Neil Hargreaves.

Lip service to independence and residents

The light of comprehension seemed to dawn on the Cabinet when UDC Leader Howard Rolfe outlined his proposals to revamp the working group in order to restart the process. He pledged a number of our Residents for Uttlesford election promises for how we’d fix the Local Plan, including reducing political meddling in the Local Plan by limiting Cabinet participation to less than 50%. But he refused to accept all and do what was really required. There was no formal apology and no remorse about the bungling of the Local Plan.

In line with the R4U pledges, Cllr Alan Dean pushed for stronger and more open revised Local Plan process. He proposed  that an independent chair be appointed to the Local Plan working group and critically allow residents full participation in the process. The Leader sought to maintain his grip over the working group and spoke against true bi-partisan balance. Then every Tory in the room voted to refuse his motion.

After the meeting John Lodge, the chair of R4U said “The Tories have closed ranks to block both an independent chair from the revamped local plan working group and also deny residents a meaningful seat at the table. This leaves the ballot box in May as the only option for residents to get their voices heard.”

A moving moment for residents was when Conservative Councillor David Sadler apologised to his ward members for the way the council had bungled the Local Plan. It was genuine, well received and kudos to him for stepping up. But the truth is that he was not personally responsible. He may be held accountable by the electorate in May, but he shouldn’t fall on his sword for another’s mistake.

The vote of no confidence in both the UDC Leader Howard Rolfe and his Cabinet colleague Susan Barker, architect of the failed Local Plan followed. The preceding debate was nasty and personal with the Tories savagely attacking opposition, the media and the public in an attempt to deflect attention from their own failings.

There were particularly cruel, vitriolic and personal attacks against all non-Tories by former UDC leader Jim Ketteridge and Cabinet member Vic Ranger. Conservative Newport District Cllr Jeremy Rose attempted to bully his ward colleague, R4U Cllr Joanna Parry, of whom he said “her views count for nothing.”

His dismissal of a fellow councillor reflects the fact that despite promises of future cross-party cooperation, the Tories are unable to set aside their differences for the benefit of residents and effective governance.

Again then every Tory in the room voted against the motion of no confidence – they all publicly supported those responsible for the Local Plan mess.

Here is how your own ward councillor voted:

With a whipped vote behind them, the leadership of UDC have washed their hands of any responsibility for their failed Local Plan. But it is their Plan and no one else’s; they control the District Council, tell the officers what to do, and make the decisions. There is no one else to blame.

Voters are angry and have a right to know who is going to be held accountable for the waste of £ millions of our money.

A change for the better

What is clear that the leopard isn’t going to change its spots. If residents want to get their voice back, they’re going to have to elect a new, resident-led council in 2015. We believe that Residents for Uttlesford is the only party that can truly represent locals and not national party self-interests.

You can listen to the replay of the meeting here (click on the 18th December meeting). The public statements are at the start and the Local Plan items are towards the end of the agenda. You can jump directly to them using the drop-down menu. They are marked as ‘Uttlesford Local Plan Examination’ and ‘To consider the following Notice of Motion’.

3 Replies to “Dan Starr: Residents views “count for nothing” as Tories close ranks to save face over failed Local Plan”