The issue of dog fouling (or more specifically dog owners not responsibly cleaning up after their dogs) has really hit local social media platforms in the last couple of weeks. We all know that it’s messy, disgusting and potentially dangerous and yet it appears to be very difficult to tackle. The recently launched UDC campaign to clear up our local footpaths and pavements has reiterated the message that this negligent behaviour is not acceptable, and can see dog owners facing a £1,000 fine if caught. 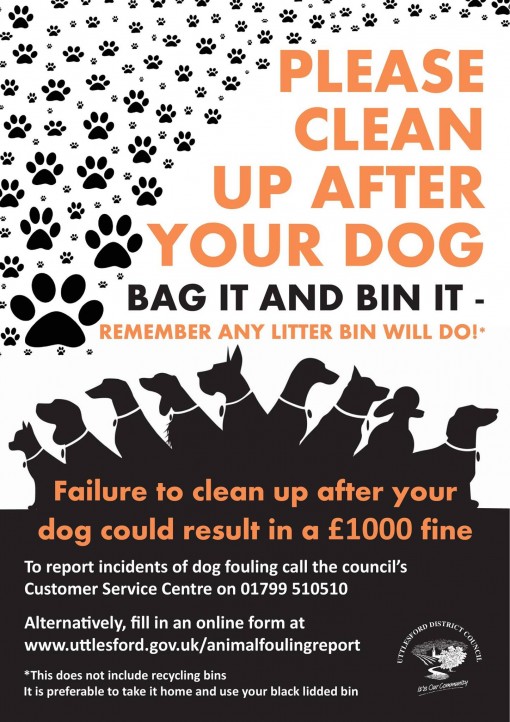 R4U councillors Neil Hargreaves (Newport & Widdington) and Sharon Morris (Saffron Walden Audley) have been investigating this issue in their wards and looking further afield to see how other councils tackle the problem.

In Newport, there seems to be regular ‘hotspots’ that see fouling. A quick walk around the village, and it’s clear that there is a persistent problem. Cllr Neil Hargreaves thinks that:

“All dog owners know they must pick up. While the message does need continual repetition I don’t think that will make much impact. The offenders don’t care and know they can get way with it as the chance of being caught is low and the possibility of a significant fine is only slightly more than winning the lottery jackpot”.

Cllr Sharon Morris first spoke out on this issue during the election campaign in May 2015, and was part of the reason she wanted to represent local residents in tackling community issues. As a parent of school age children, she knows all too readily the problem of removing dog mess from kids shoes and buggy wheels, and as a dog walker, understands the responsibility of dog ownership. Sharon says that:

“It is SOLELY the responsibility of the dog owner to clean up after their dog. In my conversation with Sue Knight (UDC Dog Warden) about the UDC campaign at the back end of last Summer, I suggested a Buddy Scheme could be set up where elderly people, who are unable to clean up after their dog, are paired up for a walk with someone who is willing to do the job they can’t. Not for one moment would I want to suggest the elderly shouldn’t have dogs if they can’t pick up the poo. I believe dog ownership provides enormous benefits – physically, mentally, socially”.

So it seems that the problem is both one of persistent offensive fouling, but also enforcement. In other areas of the country, various strategies have been tried to tackle the problem.

DNA testing is one option trailed in Barking & Dagenham, and more recently elsewhere in Essex,  although it’s very expensive and relies on there being a database. This would be an enormous and expensive task that would not capture the data from people who don’t want to be caught anyway (the reason the dog license was done away with).

Enforcement relies on the Officer being in the right place at the right time. Imagine the wage bill for having 100’s of Enforcement Officers prowling streets across the District between 6 and 7 am and again in the evening (most irresponsible owners rely on the cover of darkness to conceal their dirty deed)! Many Councils seem to have only one Animal Warden so, unfortunately, whilst the legislation is in place the ability to enforce it isn’t.

Use of CCTV in ‘hot spots’ is possible but again there is a large cost involved and would this only move the ‘hot spots’ to somewhere else? Cllr Hargreaves thinks this could make a difference in his ward, especially in areas such as the recreation ground. He suggests that a webcam is installed at frequent mess spots, that prosecutions occur and ensure they are publicised – something which the dog warden could coordinate. 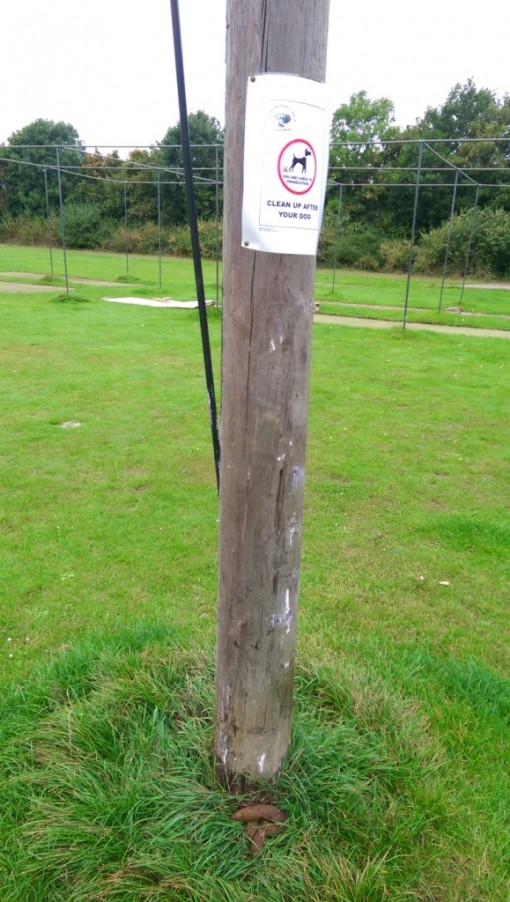 Another alternative is to literally highlight the problem with the use of biodegradable fluorescent spray! Camden City Council has tried marking out dog mess in fluorescent pink spray, to indicate the ‘hotspots’ that regular offenders use, and to deter further fouling. Richmondshire District Council have gone one step further using their spray with slogan stencils that act as a reminder to local dog walkers of their responsibilities. 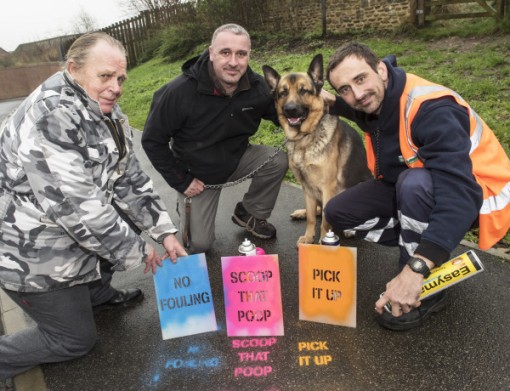 So what should happen locally across Uttlesford? Cllr Morris supports “Sensible and practical direct action. The average dog owner is not the problem, like many things the problem is the people who simply don’t care and get away with it because they know they can. The problem will never be 100% eradicated but perhaps by ‘highlighting’ the physical evidence some of those responsible will be shamed into changing their ways? I think the community would appreciate some visible, direct action!”