There is growing concern over Uttlesford District Council’s Local Plan preparation as a new document is published that R4U believes shows that the UDC leadership have again made up their minds about where they want to build rather than following evidence.

The document was published by UDC ahead of the monthly Planning Policy Working Group, which provides oversight on the Local Plan. The document reveals previously undisclosed details of a January meeting between South Cambs District Council and UDC leaders including Council Leader Cllr Howard Rolfe and Local Plan head Cllr Susan Barker.

John Lodge
R4U Chair & Leader UDC
“The document details that Cllrs Howard Rolfe and Susan Barker are proposing to focus future mass-housing development along the A120 corridor from Braintree to Stansted, and that they have ‘a long term vision for a greater Saffron Walden’, whatever that is.”

“Cllrs Rolfe and Barker had absolutely no authority to make these proposals and in our view they have acted improperly. These revelations are particularly damning for the UDC leadership because they go to the heart of why the Planning Inspector rejected their plan last time. The law is quite clear – the most sustainable locations must be selected for new homes and evidence must be followed to determine this. They can’t just make it up because they politically want it to be the case. Remember only last year it was shown that UDC were proposing virtually none of the extra housing for where cabinet members lived, until they were forced to withdraw that draft plan again because of a lack of evidence. And here they are at it again. They’ve now been failing at the local plan for more than 10 years and they have wasted £ millions of our money.”

“It also shows that the UDC leadership are misleading councillors and residents. Earlier in February, UDC councillors received a detailed briefing on the Local Plan progress, and assurances that UDC would follow a proper process. In fact residents have been repeatedly promised by UDC leader Howard Rolfe that this time round the Plan process would be proper, transparent and evidence-led. Yet here is another example of politicians saying one thing in public and doing another in private. What Cllrs Rolfe and Barker are telling South Cambs District Council bears no relation to the evidence base which UDC is meant to be compiling.”

“This is exactly the type of underhand behaviour that residents have had enough of. Last week R4U won the Elsenham and Henham by-election with 60% of the vote. Why? Because residents don’t like being deceived and they don’t like career politicians that toe the party line. They want open, honest and transparent councillors who work for their fellow residents.” 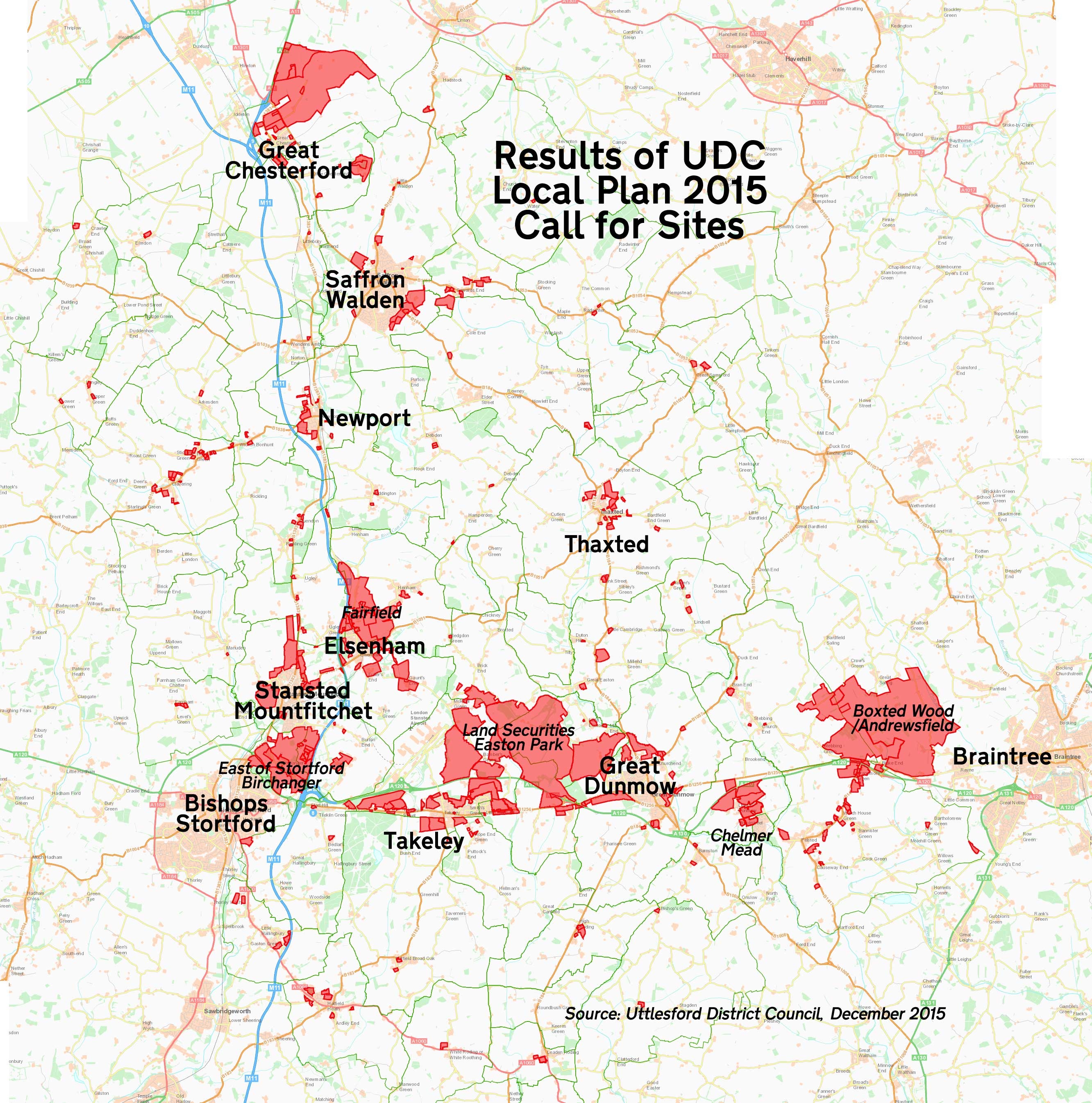 This map shows the list of possible development sites published by UDC. The UDC leadership went to the press in the autumn of 2016 to announce that they wanted to concentrate new homes along the A120 and Saffron Walden. They were forced to withdraw this when it was discovered that they had no evidence to support these were the best location, as the law requires. They then promised that they would restart the Local Plan and follow the evidence this time.  Yet the new document shows that in January 2017 they were still saying behind closed doors that they intended to follow through with their original pan.