In a joint press release Town Councillors from Residents for Uttlesford, Liberal Democrats and Labour have announced that they have supported a solution that should mend the poor financial state inherited from the previous Conservative Town Council.

In December councillors committed to work together to fix the poor state of the Saffron Walden Town Council’s finances inherited from the previous administration. At a Town Council meeting on Thursday 14th January members working on the subcommittee reviewing the 2016 budget voted to send the proposals to the Full Council for final review and approval on 21 January.

“By now it is well know that the outgoing Town Council administration left us with a large funding deficit, general financial reserves drained by 80%, and a town hall that is falling down. In fact the Town Hall is in such a perilous state that the insurance company has now withdrawn storm damage cover.”

“All four parties at the Town Council have been involved in the budgeting process, and officers under the leadership of our new Town Clerk, have worked very hard to find a budget solution that councillors can support. The Council should not be running a deficit as the previous administration had, so the challenge of having to balance the budget in 2016/17 was a colossal one. This could not be achieved without a slight increase in council tax. The proposed budget will see a 49p-a-week increase in the typical Band-D Saffron Walden Council Tax Precept, and a proposed 6p a week increase the year after. A Band-A property with Income Support will pay 4p a-week more – that is just over £2 a-year.”

“It is important to plan properly for the future. The proposed 2016 budget is financially sound, and for the first time the Council will now also have a 5-year financial plan. Under the plan services will be maintained, buildings and vehicles will be repaired, and we won’t be running a deficit. Significantly from the second year we’ll be able to rebuild our general reserves each year to a reasonable level.”

“We know that overall Council Tax bills are likely to go up as central government squeezes more of the tax burdens onto local authorities. That means it is important that the increases from the Saffron Walden Town component are minimised. However this modest increase will allow us to also repair the Town Hall, a building at the heart of our community. The way we maintain it represents our commitment to caring for our town. This budget will spread the cost of the repair over several years. The immediate actions this year will make it safe and remove the scaffolding that is currently protecting the public from falling tiles and masonry.”

Facing cuts in central government funding, Essex County Council also recently announced that they proposed to increase their part of Council Tax bills by 84p-a-week for an average Band-D property. The Police and Crime Commissioner has also announced a similar 10p-a-week increase. 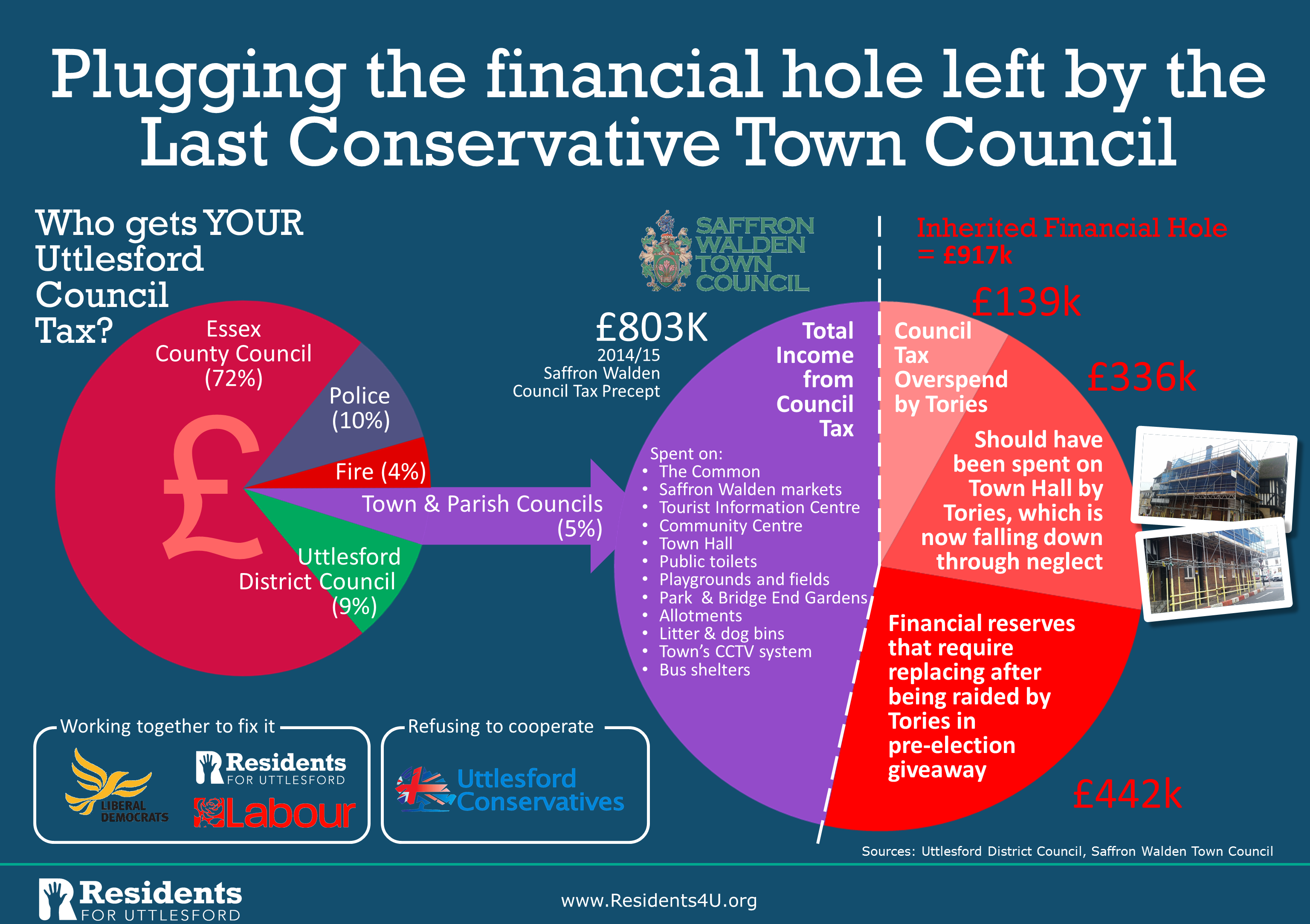 The financial officer’s presentation to councillors and members of the public showed that these General Reserves are less than £60,000, against recommended guidelines of £500,000 and they were repeatedly described as “woefully inadequate” by Town Council officers.

Officers also showed an 11% deficit in the former Conservative Council’s 2014-15 spend. Income from council tax was £803,000 but the Conservative led council at the time spent £89,000 more – in effect avoiding a tax increase before the election – leaving a problem for the incoming Council.